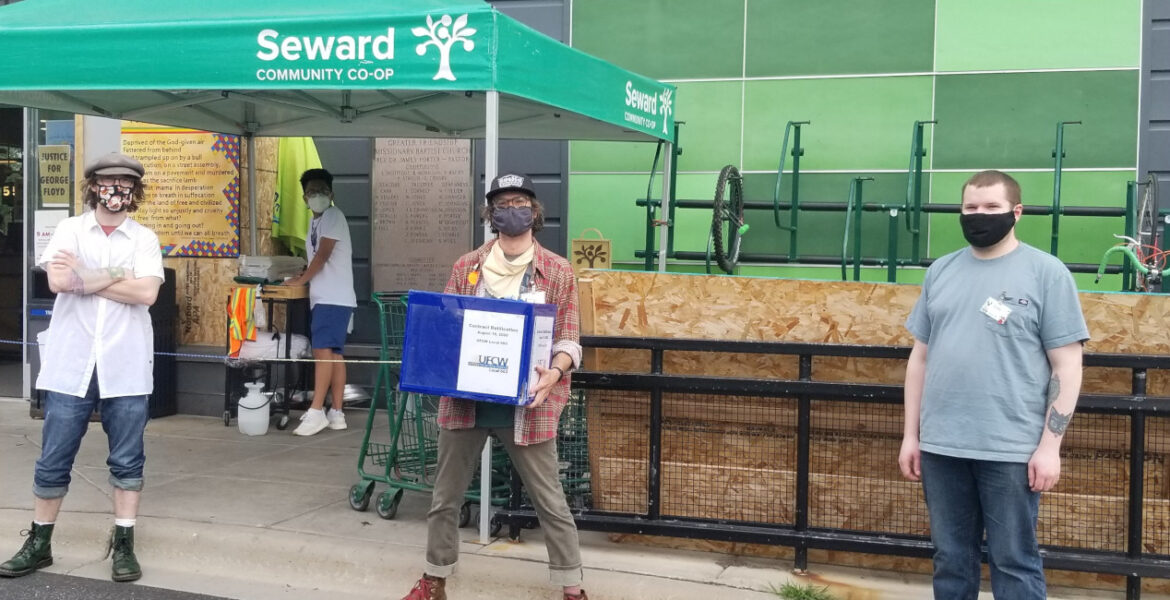 Workers spoke about what $15 means for them at the workplace.

“I enjoy working at the co-op and I’m really happy about our vote,” said Annesah Amatullah, a part-time cashier at Seward. “Raising the minimum wage at Seward shows me that my work is important and that I’m valued as an employee. It also helps with less turnover because we’re making enough and don’t have to look elsewhere for better pay. Making more means I don’t have to pick up extra hours and allows me to spend more time with my son.”

Workers at Seward Co-op have a three-year contract that includes a $15 per hour starting wage scale that went into effect on August 21, 2020 and additional paid time off for members beginning on January 4, 2021.

The impact of the $15 an hour wage scale at the three Seward Community Co-op stores means that upon ratification, approximately 56 percent of current employees received a pay raise of $1.50 an hour, and about 20 percent of current employees will receive a pay raise of $1 an hour or more. To help balance the increase in cost of living per year, the agreement includes guaranteed pay increases for members based on years of service every year of the contract.

Local 663 members at Linden Hills Co-op ratified their three-year contract on September 30. Grace Rogers, Grocery Bulk Buyer at Linden Hills and member of the union bargaining committee, is happy about the $15 an hour wage scale as well. “Union coops should be setting the standard for treating their employees well. Many of us started working here because they have a reputation for good wages and benefits. I’m proud to be a part of getting us there.”

The impact of the new $15 wage scale at Linden Hills Coop means that the average wage will increase about $1.54 per hour. About 51% of current employees will receive an increase of $1-2 and about 18% will receive more than $2.

“I applaud our union members that served on the union bargaining committees and co-op management for arriving at the $15 an hour starting wage two years ahead of becoming the law in Minneapolis,” said UFCW Local 663 President Matthew Utecht. “Our union is proud to have partnered in a large community coalition while working together during the citywide push for $15 in 2017 because we believe everyone deserves a higher minimum wage. The collective bargaining agreements with Seward Community Co-op and Linden Hills Co-op build upon that work, and set higher minimum standards to protect and value each other at work, and that is important.

The new wage scales will change workers’ lives, especially since Minnesota grocery workers have been on the frontlines of COVID-19 since day one, and continue to put their lives on the line every day at work to serve their communities,” Utecht added. “Congratulations again to our members for affirming their pursuit for building better lives.”

As for the rest of the unionized grocery industry, Minneapolis’s UFCW Local 663 union members’ contracts are set to expire in early March of 2021 with Kowalski’s Markets, Lunds & Byerly’s, Jerry’s Foods, Jerry’s Cub Foods and the majority of independent union grocers in Minneapolis and the west metro area.