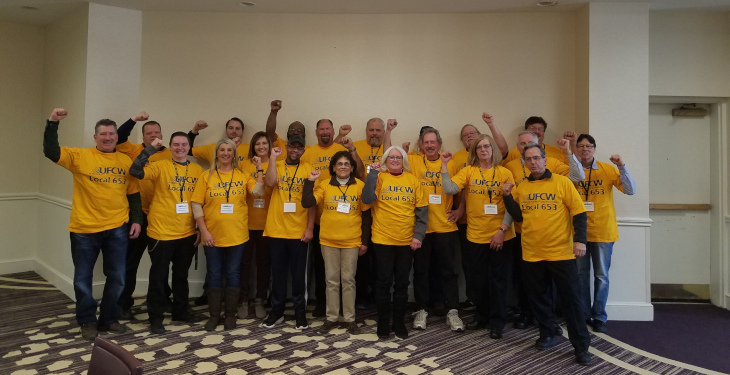 Benefit highlights include the creation of an industry-wide groundbreaking Variable Annuity Pension Plan (VAPP). Employees from Supervalu and the independent grocers will transition benefit accruals from the current defined benefit plan to the VAPP beginning in January 2019. Significant new employer contributions were negotiated into the current plan which is underfunded. The VAPP is a defined benefit pension design where the accumulated benefit accrual is adjusted up or down each year based on an investment hurdle rate of 5.5%. A pre-funded stabilization reserve was negotiated to protect VAPP benefits in years when assets underperform. A VAPP  is attractive to workers because it reduces investment risk and offers upside in terms of benefit improvements. Employers like VAPPs because the design limits their liability.

“I’ve been in the industry a long time, and I’m pleased that we stabilized our legacy pension and will be investing in a VAPP. It’s a giant step for our employers and us to work on and solve together because it is not only expensive but affects so many peoples’ livelihoods. I have peace of mind knowing we solved it together,” said Doug Dehmer of Knowlan’s Festival Foods in Andover.

Workers at Kowalski’s who qualify for the 401(k)-retirement program will continue to receive contributions that were negotiated between the union and the company. These include full-time contributions from $1.85-$4 an hour and part-time is $1.35 an hour. Kowalski’s withdrew from the union pension plan two years ago.

All eligible workers will enjoy a secured employer commitment to pay the increase true cost of the Health & Welfare plan across contracts.

The total worker compensation of the Supervalu contract is over $102 million in the first year alone.

All workers covered under the approved contracts will enjoy improved treatment and worker protections in the workplace with new and improved language including: Respect and dignity in the workplace, bereavement leave for domestic partners, Victim, Witness, and Domestic Abuse leave, student seniority, and automation language that gives notice to employees and training opportunities if any technology will be implemented in the store.

“One of the things that sticks with me is that all of the agreements added respect and dignity in the workplace language. That language levels the playing field for workers, and affirms we are the most valuable asset. I’m proud of that,” says Elizabeth Johnson of Kowalski’s in Uptown.

The approvals today follow on the heels of the contracts UFCW Local 653 members ratified at Lunds & Byerlys on February 11 and Jerry’s Enterprises who runs Cub Foods and Jerry’s Foods on February 25.

“I’m inspired by our members today who said yes to improving the quality of their livelihoods and future. We’re continuing to build better lives for our retail grocery members and elevate the industry while doing so.

The Variable Annuity Pension Plan is the vehicle to reach the retirement security that our members earn and deserve. Together, we’re leading the industry in pension solutions that establish the goal of a dignified retirement,” said Matt Utecht, UFCW Local 653 President.

###
UFCW Local 653 is a private sector union over 10,200 Minnesota workers strong in the grocery, food processing, healthcare, retail, and other industries.