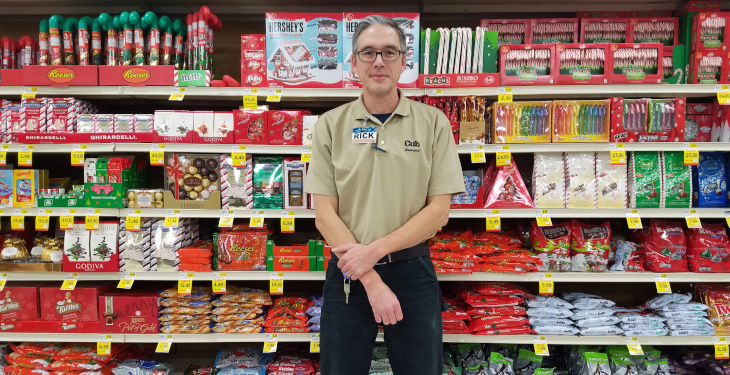 It was a cold November morning, and UFCW Local 663 member Rick Phelps was working his normal shift at the Haug’s Cub Foods in Plymouth stocking in grocery. Denise from the Coon Rapids store was working a shift for another member who was out. All of the sudden Rick heard Denise saying loudly over the radio, “Code green! Code green!” He explains, “a code green means there is a medical emergency. I responded to that and it was in aisle 10.”

Rick took a deep breath before he turned the corner to the next isle, because he didn’t know what to expect. A customer was on the ground.

“I’ve done small things here you know like low blood sugar things of that nature,” added Phelps. “I went to check his pulse and for any respiration he had neither. So I started CPR. When I was down doing compressions, our security came up and I asked him to go get the AED. He was on top of it.”

In fact, 15 years ago Rick took the first responder training offered when he first started working at a Cub Foods in Coon Rapids. Then it became something important to him, he says it’s a hobby, and now he is a volunteer firefighter in St. Francis.

If not for the union family at Cub Foods, Rick’s training and the AED in the store, the victim might not have survived.

After paramedics picked up the victim, Rick said, “I finished my shift. I was happy to help. It’s what I do. I just really focused and went through my training. The victim waking up was a bonus—that was great.”

Many people are calling Rick a hero, including President Utecht. “On behalf of UFCW Local 663, I want to thank Rick for saving a customer’s life. He truly is a hero.”

Phelps is grateful he was able to save the man’s life. His hope is that others will take AED and CPR training as well.

“If you have the opportunity to do it everybody should do it,” added Phelps. “You never know when the person right next to you is going to need it. Fortunately, I was in the right place at the right time.”

From making sure the shelves are stocked at Cub, to saving lives as a volunteer first responder, his commitment to his community shows.

Contracts Member Stories
March 26, 2018August 29, 2018
2381
I’m proud to report that the majority of our contracts for our large and independent grocers were ratified on or before Sunday, March 4....
Member Stories News
July 25, 2019July 26, 2019
2522
UFCW Local 663 is building better union grocery jobs, one conversation at a time. And, we have a plan. Our Summer 2019 Special Project...
Events Member Stories News
May 4, 2021May 4, 2021
960
Utecht’s bold leadership will continue to build better lives for union workers throughout the Midwest BROOKLYN CENTER–Matthew Utecht, President of United Food & Commercial...
Member Stories News
December 19, 2019December 19, 2019
1549
Our Union Steward Spotlight features Deb Lambert. Deb Lambert loves Halloween. In fact, she’s from the Halloween Capital of the World–Anoka. For over 20...