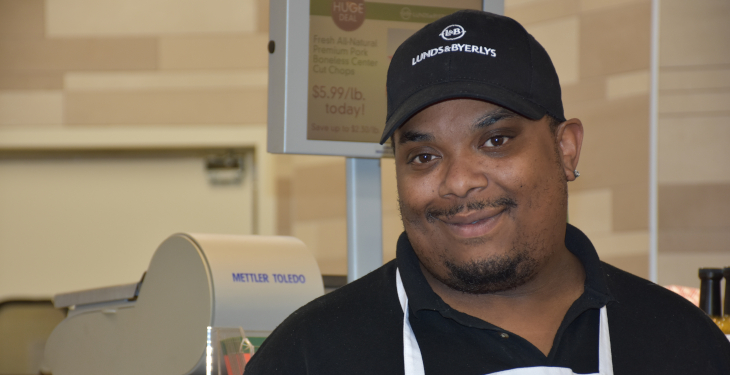 “Last year, when I first learned that our union’s tentative agreement included language that made Retail Specialists into Classified Assistants, I didn’t know what it meant. After my union rep explained it to me, I felt excited! My pay may go up! And I would have even more security in my job! I definitely voted yes on our contract!”

Keith began working at Lunds & Byerlys Bloomington location in 2017 as a Retail Specialist in the meat department. That meant he got 40 hours a week with benefits. However, store management could reduce the position to part-time…at anytime. That meant hours could be cut as well as benefits, which is not good for workers. Workers should be able to depend on these things we work hard for and deserve. So our Union did something about that.

Thanks to the leadership of UFCW Local 663 President Matt Utecht and union members on the bargaining committee, all 164 Retail Specialist positions in March of 2018 became Classified Assistants at Lunds & Byerlys. The current union contract was voted on by everyday union members and began in March of 2018. Retail Specialists are now a thing of the past there. Workers win more secure full-time positions because of our union contract, and because we stood together and fought for it.

All Classified Assistants at Lunds & Byerlys Can Enjoy:

“It’s good to know my union’s got my back. My future is promising because of this great opportunity on the job. I appreciate what I got as well as what lots of others benefit from in our contract.” –Keith Farr

The Union Difference Makes It Better

Keith’s no stranger to working in the meat department in the grocery industry. Farr came from a couple of nonunion grocery stores before he began at Lunds & Byerlys. In fact, he came to his current position at Lunds & Byerlys with 15 years of industry experience.

Farr notes, “I like the hands-on learning how to cut meat that comes along with a lot of journeymen by your side. It makes me better and I like that. I have this great support by my side because we work hard and deserve the best, and as a union we are willing to fight for that difference.”

Keith is not alone. Over 13,000 UFCW Local 663 members live the Union Difference everyday. That means workers have a more secure workplace through guarantees of wages, raises, benefits and safety through a union contract versus a nonunion workplace. This contract is a legal document between the business and the union of workers on work performed.

The Union Difference not only creates more wealth overall, it also creates more prosperous communities by helping to lift up wages in nonunion workplaces. Higher wages means more money in families’ pockets and that means more is invested in our communities.

Keith goes on to say, “The customer connection is also really important to me. They could go to a nonunion store down the street. I get them laughing, because I know that having a smile helps to make that connection and feels good.”