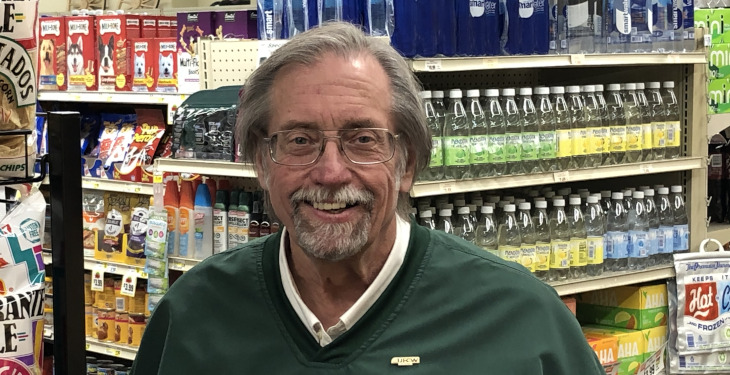 I recently delivered a “50” year pin to a veteran of our industry. Roger Olson completed his 50th Year in May of 2020. His dedication and perseverance over the last 50 years are an amazing accomplishment. I want to thank Roger for his service in our industry for the last 5 decades. Here’s an account of a remarkable career:

Roger started his grocery career in May of 1970 at Corporate Red Owl and it was managed by Ev Green. He worked as a Carry Out/Bagger making $1.60 per hour. Roger says:

“During that time stores were all closed on Sunday’s and they had separate wage scale for cashiers and stockers. When the stores were able to open on Sundays, full-time employees were paid overtime. If there were no full-time volunteers, the senior part-time employees were offered the double-time wage. Products were much different; if you wanted frozen pizza your choices were Totino’s or Jeno’s. There was no Tombstone or Heggie’s at the time.”

Roger remarks, “It has been an interesting and fulfilling career in the grocery business. It’s hard to believe that 50 years has gone by. Through all the changes that have happened in our business, the one constant has been our Union Representation. When I started it was the Amalgamated Meat Cutters and Butcher Workman and it has evolved into the United Food and Commercial Workers that we are part of today. For that I am always thankful.”

He goes on to say, “Change can be difficult in our business, but at the end of the day, it is still about the customer and taking care of them.” “It has been a privilege to have worked with and for all of the people that I have in this business. I like to think I learned something from all of them.”

There is no excerpt because this is a protected post.

Benefits Contracts Member Stories
August 26, 2020August 26, 2020
881
By Paul Crandall, Secretary-Treasurer These are certainly challenging times for everyone. I never thought six months ago that we would be having negotiations and...
Member Stories
November 19, 2019November 21, 2019
1828
Mike Cunningham is one of our hardworking Local 663 members of 23 years. He is currently a meat cutter at one of our union...