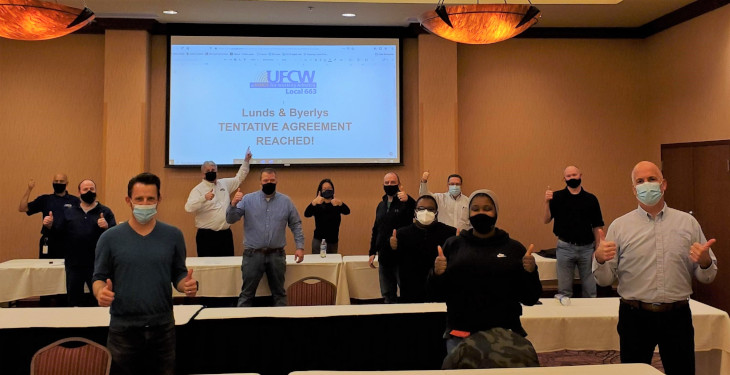 BROOKLYN CENTER–Matthew Utecht, President of United Food & Commercial Workers Local 663, was re-elected by overwhelming acclamation at the monthly union membership meeting last night on May 3, 2021. President Utecht will continue to lead the over 13, 200 hard-working union members throughout the Midwest in his three year term. Local 663’s diverse union membership spoke from the heart about President Utecht’s leadership during the nomination period and included members from Worthington, Twin Cities, and suburbs.

UFCW Local 663 member Deonte’ Diamond, who works at Cub Foods on West Broadway, was one of the many that spoke to President Utecht’s strengths, “I had the pleasure of working with him on the last union negotiating committee where under his leadership we got a great five year contract approved. Keep doing a great job Matt, and I nominate you to continue as president.”

Cecilia Lopez, UFCW Local 663 member who’s worked at JBS in Worthington for 14 years said, “I nominate Matt Utecht for president because he cares about us. He’s a good man for the job.”

President Utecht accepted the nomination and spoke to union membership.

“I’m humbled and it would be an honor and a privilege to accept the nomination for president. Thank you for all of those kind comments from everyone that took the time to get on this afternoon’s membership meeting call and took the time to nominate me.

It truly moves my heart working for this great union membership each and every day that I do the job. I’ve met and had the pleasure of working with so many fantastic people–be it staff, executive board, bargaining committee members, rank and file members all across the state–whether in Worthington, Madelia, Butterfield, Minneapolis, suburbs, or Brainerd. It is a blessing for me to be president. I love it and will continue to do everything within my power to do the best work humanly possible on your behalf.”