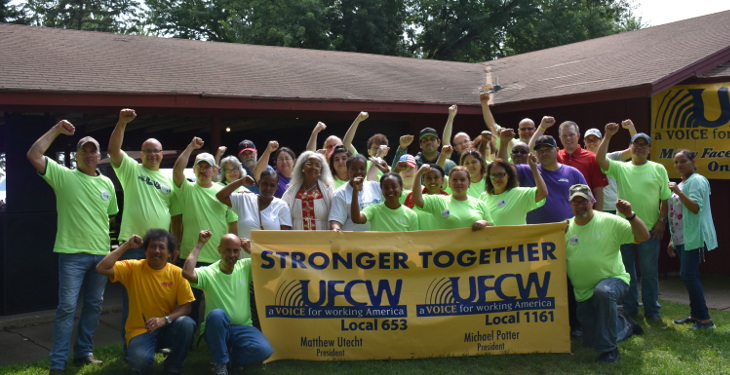 Minneapolis & Worthington—Union members from United Food and Commercial Workers Locals 653 and 1161 voted to build a better life together by overwhelmingly approving a merger vote. The union merger creates the largest UFCW Local in the five state area, with membership totaling over 13,100 across eight different industries.

UFCW Local 1161’s majority of members work in meat packing, with its largest employer in Worthington, MN at the JBS pork processing plant. Union members also work in manufacturing in Butterfield and Madelia in Southwestern Minnesota. They join the ranks of UFCW Local 653, whose membership includes workers in the grocery industry, healthcare, and retail.

Union members from both locals are excited about the opportunity to work together as one.

“We’re stronger together. I know together we’ll be able to have even more muscle at the bargaining table to build even better contracts in the future. That’s important for my family, so we can live safer and happier lives,” said Khampiane Keophimphone, Local 1161 member at JBS Worthington.

“It’s a win win situation. Both of our Locals are doing well, and it’s just the right thing to do to come together at a time when working people are under attack. I’m proud to stand up for workers like myself and others,” said Lee Borela, Local 653 member at Cub Foods.

“I’m proud of the decision our members made to merge. I’m honored to continue serving hard-working union members in our newly formed organization. As Frederick Douglass said, ‘People might not get all they work for in this world, but they must certainly work for all they get’, and I know that having strong contracts and unions help us achieve that,” said Local 1161’s President, Michael Potter.

“I’m inspired by the commitment our union members have shown to become stronger by this vote. I’m excited to build power for our union families and communities across Minnesota.

“The best defense is a good offense. That’s why we’re joining together. As one larger union, we’ll have more strength at the bargaining table, in organizing, and creating stronger relationships in our communities. I am committed to fighting for our members to build better lives across the ever-growing industries that we represent all across Minnesota,” said Matt Utecht, President of UFCW Local 663.

###
UFCW Local 663 is a private sector union over 13,100 Minnesota workers strong in the grocery, meat packing, food processing, retail, healthcare and other industries.