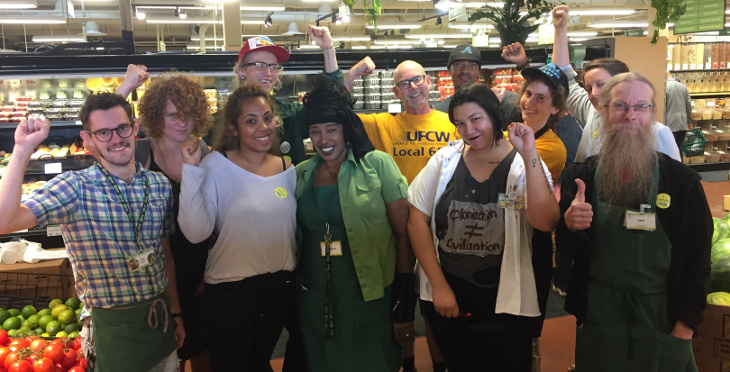 Highlights of the first contract include pay equity, consistent scheduling and discipline procedures, as well as diversity and inclusion language.

Before the contract, pay wages were arbitrary. Now it is based on work and years of service. The agreement is a major gain for people of color and immigrants.

Lubaba Qabeto is one of the Local 653 members who will benefit from pay equity in the contract. Lubaba has worked at the Seward Franklin location in the front end for almost 15 years and she will be receiving a 17 percent raise.

“I’m happy that I’ll be getting better wages. It’s a great win for all of us union members. Better wages mean more money for my family to overcome financial burdens so we can thrive,” said Lubaba.

Consistent scheduling and discipline procedures in the contract also value the union members’ worth. Ace Fox, production shift lead at Seward’s Creamery location, says, “The scheduling language is huge. Before, I never had a consistent schedule. Now, I’ll be able to plan my life. I’m looking forward to sleeping more, having more control, and growing more confident in my ability to make decisions about my life. That’s important, because now I know I can make it to roller derby practice. We all deserve the chance to honor our commitments to friends, family, and hobbies and our union contract paves the way to make that happen.”

Yolanda Womack, Local 653 member and Manager on Duty at the Friendship location says, “This contract will help Seward Community Co-op become a more attractive place of employment for women and people of color. We have a voice at work. Employees are also better able to provide for their families because of better wages and improved working conditions.”

This win falls on the heels of the recent union merger between UFCW Local 653 and UFCW Local 1161 from Southwestern Minnesota. The merger creates UFCW Local 663 officially on September 1st. Together, with the newly merge union members from Southwestern Minnesota and the Seward Community Co-op workers, UFCW Local 663 is the largest UFCW local in the five-state area with over 13,000 members. Matthew Utecht, president of Local 653, will also continue to lead the newly merged organization.

“We welcome Seward Co-op workers into the Local 653 union family. The tenacity that workers showed throughout the bargaining process is inspiring. That’s why I know they’re a good fit, because in our Union we support one another and never give up. Those are union values. I applaud all Seward employees on this overwhelming vote that affirms better lives and healthier communities,” said UFCW Local 653 President Matthew Utecht.

###
UFCW Local 653 is a private sector union over 13,100 Minnesota workers strong in the grocery, meat packing, food processing, retail, healthcare and other industries.