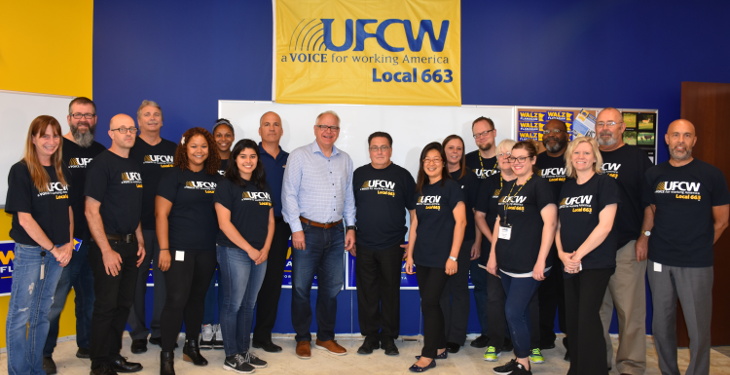 Minneapolis & Worthington–Today, United Food & Commercial Workers Local 663 announced its endorsement of Tim Walz for the next Governor of Minnesota.

“UFCW Local 663 is proud to endorse Tim Walz as our candidate for Governor on the ballot on November 6. Together, Tim Walz as Governor and Peggy Flanagan as Lieutenant Governor will be able to continue to protect working families and lift all of us up. We are inspired to work together to build a Minnesota with fair wages, fully funded public schools, and affordable healthcare as a right, not a privilege,” said Local 663 President Matt Utecht.

Today’s political endorsement falls on the heels of the recent union merger between UFCW Local 653 and UFCW Local 1161 from Southwestern Minnesota and Estherville, Iowa. The merger created UFCW Local 663 officially on September 1st. UFCW Local 663 is now the largest UFCW local in the five-state area with over 13,000 members.

UFCW Local 663 is a private and public sector union over 13,100 workers in Minnesota and Iowa in the grocery, meat packing, food processing, retail, healthcare and other industries.