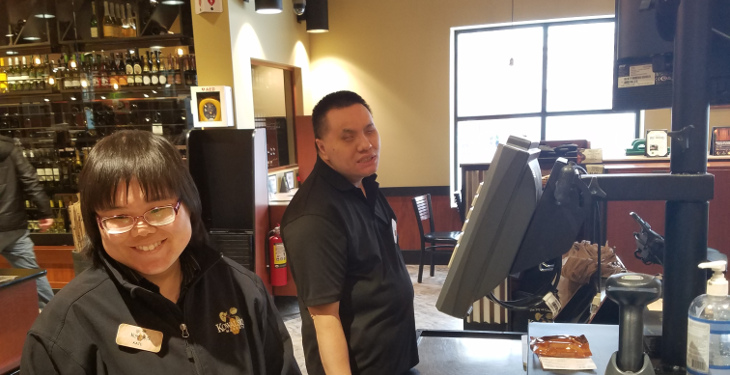 Our Local 663 members’ customer service skills shine. All you have to do is walk into Kowalski’s in Uptown and see our members at work to catch a glimpse of the pride they bring.

Kate Libby is a part-time cashier who works at Kowalski’s in Uptown. She tells me, “I like the customers, they’re nice people. I like my co-workers too.” For over four years now, Kate has been serving customers with a smile.

Kate often works the same shift with her co-worker, Nhia Kong. They’ve been working together since Nhia began last October. Nhia works part-time and bags groceries. In fact, Nhia is the first blind person that Kowalski’s Uptown has hired.

“We help each other out when I’m here, it’s been that way since the beginning,” says Nhia. The favorite parts of his job include “Talking with people and packing grocery bags.”

Kim Cizl, one of our union stewards who works at the Uptown location, says Nhia is so skilled at his job that “There’s been a couple of times when Nhia has corrected me on bagging. ’No, on the right, no on the left!’” Kim adds, “He really sees with his heart.”

This article appeared in the June 2018 edition of the Local 663 Fact Finder.

Free College is within Your Reach

Benefits Member Stories
February 8, 2022February 8, 2022
664
My name is Paul Swanson, I have been a member of our union since 1989. I started my career at Rainbow Foods as a...
Contracts Member Stories News
April 29, 2017September 5, 2018
2814
Click here for the full article. Remember to check out the On Point blog to stay up to date on all things UFCW! View Full Article
Benefits Member Stories
January 12, 2021January 12, 2021
1168
UFCW Local 663 recognizes how important education is for the future growth of the young people in this country. We awarded education grants to...
Contracts Member Stories
March 26, 2018August 29, 2018
3354
I’m proud to report that the majority of our contracts for our large and independent grocers were ratified on or before Sunday, March 4....