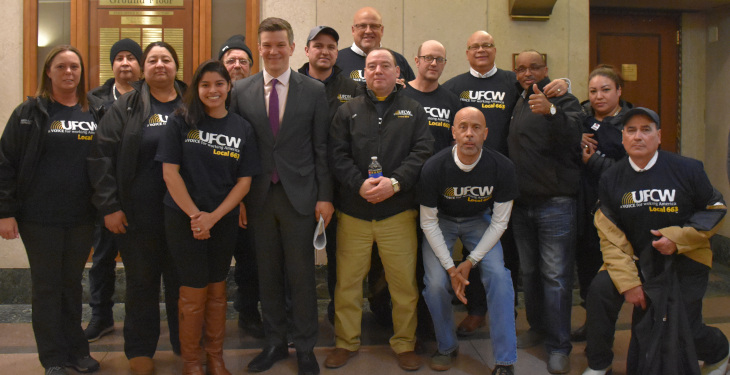 The Gov Ops committee was welcomed by a packed hearing room full of supporters for drivers’ licenses for all Minnesotans including UFCW 663 members. Powerful testimonies in support were given from law enforcement and public safety officials from the cities of St. Paul and Minneapolis, milk producers from rural MN, faith leaders, and community supporters of Latino and African descent.

This was the fifth and final committee the proposed legislation in the MN House of Representatives.

All of the following committees passed the bill:

UFCW Local 663 and Freedom to Drive coalition partners filled each of the committee rooms and packed overflow rooms with community members in support of the bill. In fact, this issue has brought the most Minnesotans to committee hearings at the Capitol this year.

The bill will be up for debate in the coming weeks at the Capitol. House File 1500’s next step is to heard by the entire House of Representatives. This is also known as the bill will be “heard on the floor” where it will go through a democratic question and answer discussion and debate, then be voted on.

Right now, there is no set schedule for when the bill will be up for debate. Typically, though, this happens rather quickly, with just a few days turnaround.

UFCW 663 will show our support by joining together in coalition for the bill. We need to be physically at the Capitol to show our support in numbers outside of the House of Representatives’ meeting room.

Your union is committed to keeping up the momentum of the campaign for drivers’ licenses for all.

Will you be there? We will tell our members and supporters as soon as we know when the bill will be heard on our Facebook page and through text.

Sign up for our mass text program by texting 663 to “MYUFCW”!

Other Ways to Support Drivers’ Licenses for All

Letter to the Editor

Will you show your support and write a letter to the editor for your local paper? We have a one page guide that will help you write and submit the letter. Ask your union rep for the guide at your workplace or click here.

Try a Facebook profile “Frame” by going to your profile pic and find Freedom2DriveMN frame for fun!
Hashtags to use are #Freedom2Drive and #MinnesotaIsReady

Get connected!
Stay connected to your union and this legislation: