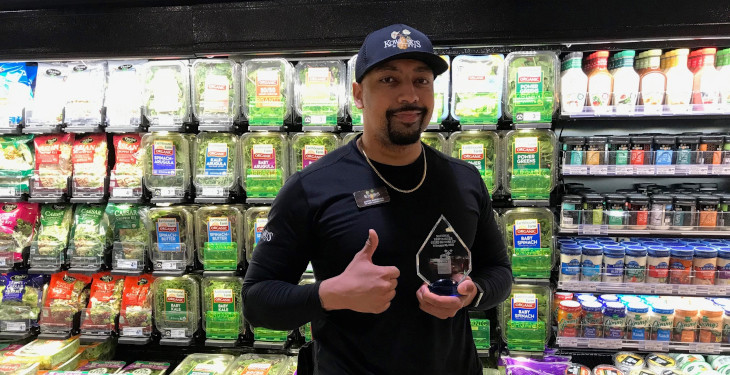 On Monday, February 28, 2022, UFCW Local 663 member Justin (aka “Juice”) Marshall competed and won 3rd runner-up and $1,000 in the National Grocers Association (NGA) Best Bagger Championship held at Caesars Forum in Las Vegas, Nevada. Justin, who is better known by his coworkers and friends by the nickname “Juice”, works at the Lyndale Kowalski’s Market in South Minneapolis and has been a stakeholder (employee) with the company for the past 16 1/2 years.

Previously, Justin competed in the NGA State Best Bagger Championship in 2015 in which he came in 2nd place and then last year in 2021 when he won 1st place. This assured him an invitation to compete against the best of the best from several other states in the 2022 NGA National Best Bagger Championship. Leading up to the National Championship, Justin trained for about 6 weeks with another Kowalski’s stakeholder, Justin Kizilos who himself had won 1st place at the NGA State Best Bagger competition in 2020 and 2nd place at the NGA National Best Bagger Championship in 2021. Having Justin to train and advise him over that 6-week period leading up to the National Championship proved to be extremely helpful in preparation of the competition he faced in Las Vegas. This training led to his best bagging training record of properly filling 3 bags with 38 items in 41 seconds!

There is power in a union

Member Stories
July 5, 2018August 29, 2018
4952
Gary Cooper knows the grocery industry. Chaska’s oldest business in town, Cooper’s County Market has been around for 101 years. Cooper’s is home to...
Contracts Member Stories
March 26, 2018August 29, 2018
3275
I’m proud to report that the majority of our contracts for our large and independent grocers were ratified on or before Sunday, March 4....
Benefits Events Member Stories
July 10, 2018June 26, 2019
2819
We’re back! In 2017, we engaged thousands of Minnesota State Fairgoers at our UFCW Local 663 kiosk, sharing who we are and about the...
Benefits Member Stories
February 7, 2022February 7, 2022
289
By Scott Larson, Union Representative Live the Union Difference with Ancillary benefits that improve your life Ancillary benefits were bargained into the UFCW 663...