Workers Need Fair Treatment Today as Much as Ever

Employers are trying to shed responsibility for providing health insurance, good pension coverage, reasonable work hours and job safety protections. Additionally, companies are making workers' jobs and incomes less secure through downsizing, part-timing, contracting out, and sending jobs off-shore. As the nature of work changes, working people need the collective voice and bargaining power unions provide to keep employers from making the workplace look as it did in the early nineteenth century.

By joining the union and becoming a UFCW Local 663 member, you will have the power to make your employer negotiate a collective agreement that ensures you get good pay, better benefits and respect on the job. The reason owners and bosses often speak badly about unions is because they don’t want to give up power and control to You – the workers - the people who make the company so successful in the first place. By exercising your right to join the union, you are taking control of your wages and working conditions and making sure you and your co-workers are treated with dignity and respect.

You have the right to make your job better, no matter where you work! We can help you make that happen. 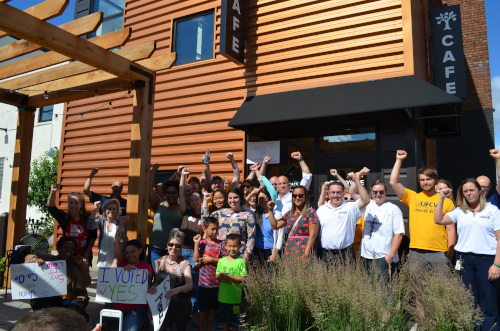 With most of the economic benefits of our economy going to corporate America, working people are using the power of collective action to get their fair share.

Working families never got anything without uniting for it! Here's a small list of what the power of coming together in the workplace has achieved:

When workers stick together as a union, they have bargaining power and a collective voice that they simply do not have when they are not unionized. Being a member of a union not only gives you a better position to get better wages, benefits and working conditions, you also get job security.

Non-union workers have limited rights and can be fired “at-will” for no reason – just because your boss is having a bad day and decides he/she doesn’t want you around anymore. Non-union workers also find that the rules can change at the whim of the employer.

With a union contract, everything is spelled out in black and white, as decided upon between the workers’ negotiating committee and the employer during bargaining, and the rules don’t change until workers renegotiate. For instance, raises are guaranteed, holidays, vacations, hours, etc. can all be defined by the contract.

In addition, discipline and firing isn’t at the whim of the employer for union members. There are certain rules the boss has to go through, a series of steps, to show that they have just cause for discipline or firing you. Throughout this time, a union representative will be working on your behalf to represent you and make sure you get a fair deal and your rights are protected.

The first step is to form a committee among the workers with representatives from each department and shift. The committee’s job is to attend meetings and educate themselves about the Union. Then they can educate their co-workers and help dispel false information spread by management.

Next, the majority of the employees must sign cards stating they want to have a Union in their workplace. After a majority of workers have signed up, the Union can ask the employer to recognize the Union or file a petition for an election with the National Labor Relations Board (NLRB).

When the Union files for an election, then the employees have a chance to vote for the Union in a secret ballot election conducted by the government. If the Union wins a majority of votes, and the employer does not challenge the vote on legal grounds, then the Union can begin the process of negotiating a collective bargaining agreement (contract).

Just think of what you and your co-workers may be able to win if you had a union contract!

Take the next step and contact a trained UFCW organizer. Fill out the form above or contact us below. News and information regarding union members, present & past events, meetings and more!

Receive updates about upcoming events, meetings, and more straight to your email inbox.